LBJ DC Fellows spend their first two semesters studying in Austin following a slightly customized version of the traditional first-year MPAff or MGPS curriculum. Students then relocate to Washington DC in June to pursue their Policy Apprenticeships for 32 hours per week during the summer and fall semesters of their second year. Simultaneous with their Policy Apprenticeships, students take evening courses at the LBJ Washington Center, focusing on the essentials of policymaking at the federal level.

The DC Concentration prepares graduates to work in the complex federal policy environment, including how to: contribute from day one to organization-critical projects; translate research and ideas into effective policy; formulate and communicate policy positions in high-pressure, media-driven environments; and develop effective strategies and skills to engage with public policy professionals at the highest levels of federal policymaking.

Professional networking, policy, social and other events give students opportunities to meet with senior federal policymakers in diverse settings. Upon successful completion of their DC academic and Policy Apprenticeship commitments, LBJ DC Fellows graduate in December of their second year. 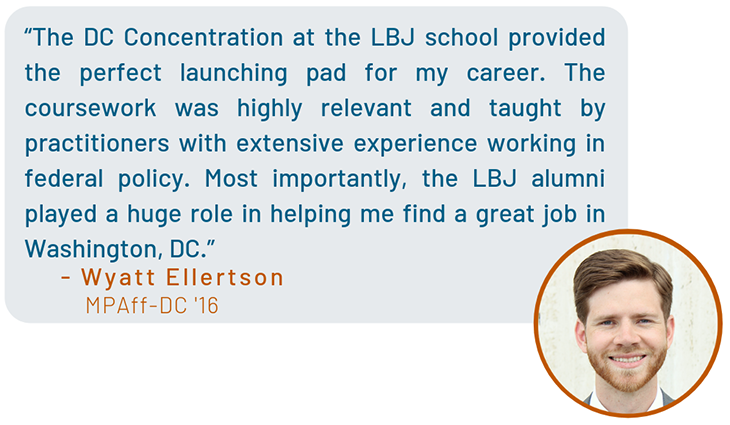 How the U.S. Congress Works

In-depth examination of the rules and practices of Congress in considering legislation and how these rules impact the behavior of members of Congress as they pursue their political and policy goals.

A deep dive into the critical role that the formulation of the Executive branch's budget and congressional program authorization and appropriations play in the federal policymaking process.

An introduction to the central elements of public management and policy implementation with a focus on different aspects of management – at a team level, enterprise level, and as drivers for change. The course includes discussion of theory and practice, and offer comparisons between the public and private sector.

Approximately 13 two-hour sessions spread over the summer and fall DC semesters, with current and former federal policymakers discussing their professional and personal decisions and choices, and the particularly challenging or interesting policy challenges they have faced. Past and future exemplars include: U.S. Sen. Elizabeth Warren (D-MA); policy directors (both LBJ alumni) for the speaker of the U.S. House and the House majority whip; a former chief of staff to the president; the administrator of USAID; U.S. Sen. Cory Booker (D-NJ); a former national economic adviser to the president; the executive vice president for policy at CAP (LBJ School alumna); Republican (LBJ School alumus) and Democratic assistants to the president for legislative affairs; former heads of the DCCC and NRCC; and the 2018 Democratic nominee for governor of Georgia (LBJ School alumna.)